“Online Lead generation” for charities – or something more? The value of community

Online lead generation for charities and non-profits is on the rise.

Watch a cause-related video on Facebook these days, and you will likely start seeing ads for online petitions, surveys, polls, download offers and more – all aimed at harvesting your contact details.

And I think this is great. Not lead generation per se. In fact, to me “lead generation” is too shallow a term to apply to causes.

But what NGOs are actually doing when they “generate leads” is – when done properly – a beautiful thing.

Let me explain that – and share the perspective I have developed through 13 years of online engagement and fundraising for causes.

Forget “leads” and “communications” – it’s about community and engagement

What is Sarah actually doing when she signs that climate change petition, or sends a message to an inspiring human rights defender through a web form?

She’s not expressing interest in a kitchen appliance that’ll save her time. She’s taking a values-based action that expresses what she as a human being is about.

And often, Sarah will go on to share her action on social media – to express those values publicly and tell her peers that she’s part of something, branding herself if you will. 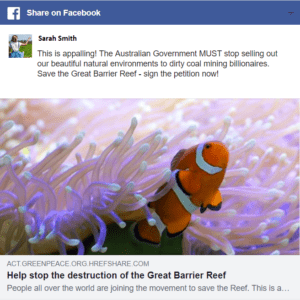 Sarah shares this Greenpeace petition after signing it – both to further the cause and to express her values publicly.

Why does this matter?

Because when we think in these terms, we start to understand the potential commitment Sarah could have to your organisation, and the emotional nature of her engagement.

Sarah’s not a “lead” and she didn’t join a “list”. She is a human who’s taken a meaningful action and her first step into your community – and she has the potential to help you achieve all your objectives in the future. She may become a donor, sure, but she can also help you achieve policy goals, amplify your message, recruit other supporters, raise awareness and more.

This is where we start to see the power of community-building through meaningful, online engagement.

And the word is “engagement”, not communications.

After Sarah’s taken a step into your community with a meaningful action, you should continue to engage her with interaction, instead of just sending her one-way communications. Invite her to conversation through social media and short surveys; give her the opportunity to call you or attend an event; provide her with more meaningful actions to take (which may include fundraising).

To be fair, some online actions are driven by motivations other than values. For example, self-interest – the motivator for resources like the brochures and Antistollingspass (“Anticoagulation pass”) that Trombosestichting (“Thromboses Foundation”) in the Netherlands offers to people affected by thrombosis.

Self-interest is the main motivator for people applying for Trombosestichting (“Thrombosis Foundation”) Netherlands’ Antistollingspas (“Anticoagulation pass”) and downloading various brochures on thrombosis. This is a value exchange between the charity and the downloader.

But the point about community and the opportunity for fundraising remains the same.

The Antistollingspass that Richard downloads has saved many lives and could save his in the future. His download has provided him with value. His opt-in to communications is a first step into the Trombosestichting community – and he will hear from and have the chance to meet other people in that community affected by thrombosis.

The value Richard has been provided, the organisation’s understanding of his personal experience, and the relationship with other thrombosis-sufferers all pave the way for successful fundraising asks.

“But how soon will he convert?!” asks the impatient fundraiser. Well if you have stayed true to the principles above, you should now be confident – and patient…

Let’s say we’re running a “2 step campaign”. Step 1 is an online survey that we advertise on Facebook to build our community, and step 2 is donor conversion via phone calls and an email journey.

The highest donor conversion rate will occur in the few weeks after each lead is acquired – while they’re being called on the phone and are still in the email journey. This is the conversion period that “lead generation” campaign reports focus on.

But very few fundraisers look at what happens in the longer-term, after the initial conversion efforts.

In late 2018, while working with Bush Heritage in Australia, I wanted to get a better grasp on this longer-term fundraising conversion. Since March 2016, we had run online surveys and quizzes about Australian wildlife. They were getting great response, and survey takers were successfully converting to become donors via phone and email in a 6-or-so week “primary conversion” period. 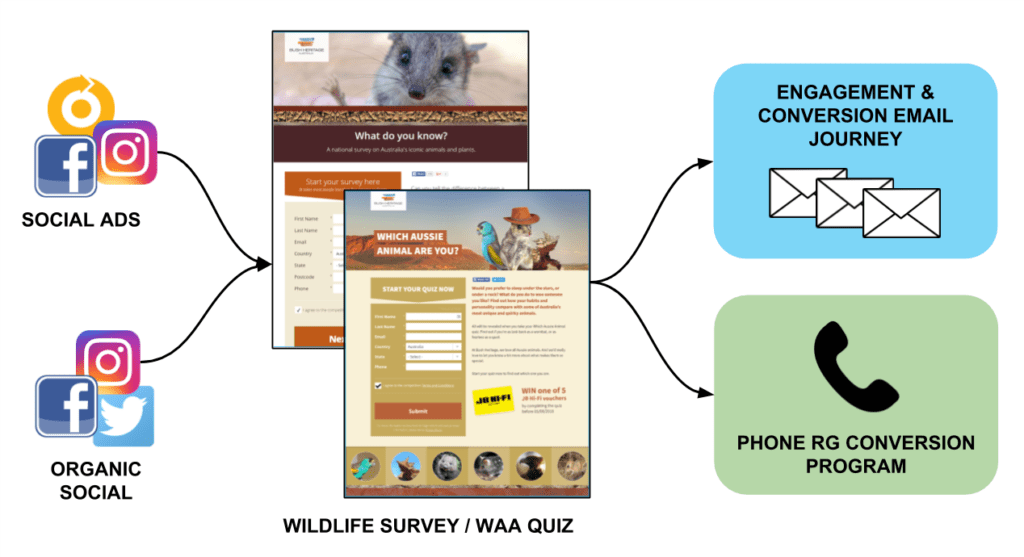 A basic channel flow for the Bush Heritage 2 step acquisition program as at mid-2018.

But we wanted to know what happened after that.

So, in late 2018, we took the group of monthly donors whose first action with Bush Heritage was an online survey, and calculated time between taking the survey and donor conversion for each one. What we found was impressive.

If we focussed just on conversions within eight weeks of survey completion (“primary conversions”), the campaign acquired 1,753 monthly donors. But when we took the limits off the conversion timeframe, we saw monthly donor conversion increase 58% to 2,762 – and this was just 2.5 years after the survey campaigns first started.

As the graph below shows, survey-takers kept converting to monthly giving 10, 20, 50 and 100 weeks after they took the survey.

The monthly giving conversion timeline for Bush Heritage leads acquired through the survey and quiz that were live in mid-2018.

This really quantifies the long-term financial potential of online community and proves the value of engagement and supporter experience.

Non-financial supporters should not be treated as “leads” or marketing collateral; to be ignored or just emailed twice a year when you want money.

Rather they are members of a committed community that will deliver you value into the future, provided you keep engaging them. The study above highlights the repeat financial value of this community, but keep in mind the value to other aspects of your mission too – from policy advocacy to awareness and volunteer recruitment.

Start experimenting with “lead generation” for your cause if you haven’t already. And forward this article on to anyone you need to convince.

Grow your engaged online community and watch your cause thrive.

Would you like to test leadgeneration for your organization? Do you have other questions regarding online marketing?
Please contact James Herlihy through james.herlihy@mindwize.nl or give us a call on: +31 23 56 77000

Do you have any questions regarding online leadgeneration

Contact James Herlihy through james.herlihy@mindwize.nl or call our office +31 23 56 77000

Get fresh insights to help your charity grow.

Lead Generation vs Peer-to-Peer Campaigns – What’s Best for Your Nonprofit?