We applied this 2-step strategy for Mercy Ships in Sweden.

We started with a proposition workshop. A great many ideas immerged. Out of these we chose the 4 best ideas for the test campaign.

We developed the 4 best ideas into 4 clear propositions: 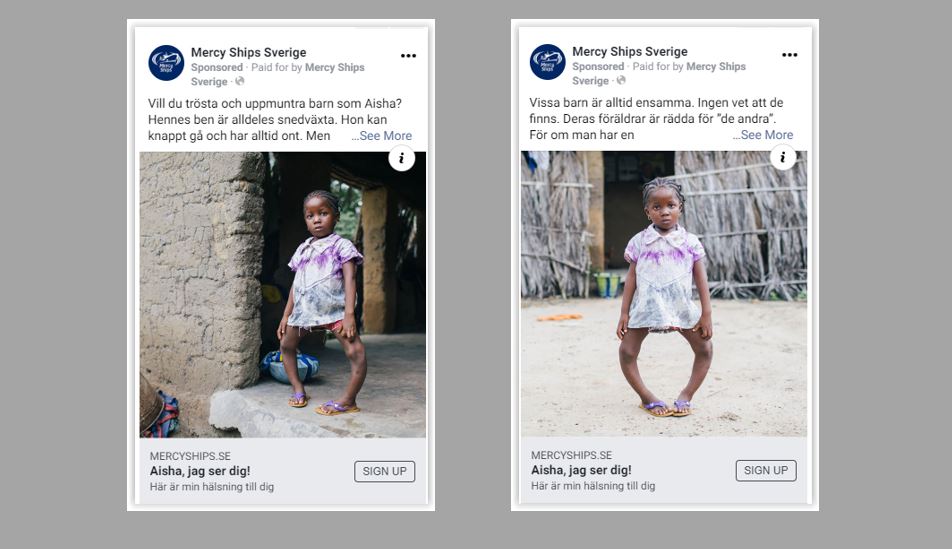 The four campaigns were aimed at a range of 8 different target groups. For example people:

We also developed different advertisements for each campaign to see which photos or copy worked best.

We scheduled two weeks to test the 4 propositions. Immediately, we had a clear winner. The budget was divided in half and we extended the test period by a week to make sure this was the best idea. This ensures Facebook is more conciencious in the selection of who sees the advertisement and resulting in cheaper and better qualified leads.

Proposition 1 was the clear winner. We utilised the Facebook form that automatically enters the subjects details ensuring we had a phone number. This way we could telephone at least 95% of the people. In addition, proposition 1 also had the lowest costs per phone lead. Often the cost per phone lead is higher than the cost per signature/response because only 40%, or less, opt in.

The monthly giving “pledge rate” – the percentage of people who, over the phone, said they would become a monthly donor– for the whole campaign (all 4 propositions combined) were high, but the pledge rate for proposition 1 was even higher.

We are still waiting for the results of the people who chose the paper form or SMS to complete their monthly donation.

We help charities and non-profits recruit more and better donors by creating appealing campaigns and detailed data analyses. We prompt people to take action. We ensure an increase in donations and help build valuable relationships. With more than 25 years’ experience in the field, we know what works to achieve the best results, so your organization can help make the world a better place.

Do not hesitate to contact James Herlihy if you would like to know more about this campaign or if you have questions concerning online opportunities for fundraising. You can contact him through james.herlihy@mindwize.nl or give him a call on: +31 23 56 77000.